You don’t have to be a record geek or vinyl nerd to appreciate Bob and Ron’s Record Club; all you need is an open mind and an appreciation of music. While the majority of air time is devoted to music most of us have never heard before—and you could call it underground or cultish—Bob and Ron occasionally include familiar songs into their sets, whether it relates thematically or they just really like the song. The so-called “deep cuts”, which have been over-looked or under-appreciated, as have many of the artists they play, are the foundation of the Record Club. To discover and share the hidden or unknown gem is the greatest reward of record collecting. For the listener, every show is like Christmas morning. Bob and Ron come bearing gifts. And this is by far my most favorite part of the show.

The Record Club does more than spark my curiosity; it inspires me to increase my knowledge of music. A quick for instance came in Episode 43; Bob and Ron played a track from a band called Relatively Clean Rivers, which of course I’d never heard of, but I liked the song, “Easy Ride”; easygoing California folk-rock-psychedelia with traces of Neil Young and countrified Grateful Dead. That compelled me to do a couple of Wiki-Google-Allmusic searches to learn more about the band, and ultimately listen to the entire album, Relatively Clean Rivers (1976, Phoenix Records).

The most recent Record Club Radio Archive on BSM, Episode 48, found Bob and Ron frequently discussing cover songs; mainly giving suggestions for local bar bands. The show featured three not-by-the-original-artist versions of somewhat classic songs performed by Johnny Winter (The Rolling Stones’ “Silver Train”), Rod Stewart (Jimi Hendrix’s “Angel”), and Robert Palmer (Little Feat’s “Sailin’ Shoes”). That got me to thinking about all the bands that I’d been in and all the covers we used to do. Now, the cover song phenomenon is completely played out in my book. These days, as soon as a song becomes a hit, YouTube is flooded with amateur cover versions. Meanwhile, there are plenty of great and unusual cover versions of songs out there; sometimes the cover outshines the original. Look no further than Hendrix’s “All Along the Watchtower”. We get that. It’s nice. Keep up the good work.

Then there are the Richard Cheese’s and the Me First and the Gimme Gimme’s of the world (both of whom I like a lot); bands who base their entire repertoire on cover songs. Anybody remember Dread Zeppelin? Currently, the reigning champion of rock & roll cover songs are the Foo Fighters. Their versions of “Darling Nikki” and “Baker Street” are pretty damn good. But at the end of the day, that’s still not enough for me. I want and need more. 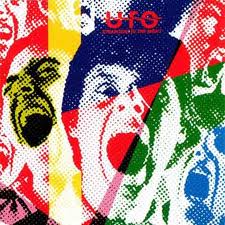 As I was listening to the end of Episode 48, anticipating the final song, UFO’s “Lights Out (in London)”, which is still one of my favorite dumb-shit quasi-metal songs of all-time, I began to wax nostalgic, having at one time owned both the studio and live versions of the song (on 1977’s Lights Out and 1979’s Strangers in the Night). And it got me to thinking that other than “Lights Out” and “Too Hot to Handle”, I couldn’t name another UFO song from either of those two records, and it got me to wondering, “Did I actually ever listen to all of Lights Out, or did I just lift the needle at the end of the title cut?”

That’s when I pulled up the UFO discography and discovered something that gave me the hiccups. Apparently, I never even listened to side two of Lights Out, because if I did, I would have known that they did a cover of Love’s “Alone Again Or”. And it’s not terrible.

The geriatric set is going to know that Love was one of the best West Coast folk-psych bands of the late 1960s. Love may have also been the first widely acclaimed cult-underground group, led by singer/songwriter Arthur Lee, himself one of the most idiosyncratic and enigmatic talents of the ’60s. On the other hand, one of the inspirations for Spinal Tap, UFO played moronic, mind-numbing, four-on-the-floor, hard rock, and more often than not, mis-categorized as a metal band. What business they had covering “Alone Again Or” is not for me to decide, but it certainly changed my thinking about the band. Now I can’t decide whether they had a great sense of humor or no clue what they were doing.

And this of course, opened the floodgates to God knows what. It wasn’t long before I found this.

Children of Bodom – Oops! I Did It Again

Now, you see, this is what I’m talking about when I say cover songs are played out. This is Children of Bodom for chrissakes, a Finnish death metal outfit with album titles like Hatebreeder and Hate Crew Deathroll. Watch this and tell me you don’t feel embarrassed for these clowns.

I’ve known about this one for a long time and it’s still a total head-scratcher. I mean, it’s great – it’s Eno! – but I dunno. Could I live without knowing this exists? Yes.

This isn’t all that much of a stretch, considering Lennox’s pre-Eurhytmics stint as lead vocalist of new wave should-have-beens, The Tourists. I can totally see where Lennox is going with this song, it’s just that I don’t want to go there. In full disclosure, I have yet to make it through the first minute of the song.

This is actually super-cool footage. Robert Wyatt was of course a founding member of the influential Canterbury scene band Soft Machine.

Accapella groups doing metal cover versions is currently one of my favorite internet fishing expeditions. I don’t know who these fuckers are, but I like what they’ve done to the song.

Fuuuuuuuuuck Ministry. I loathe this band. Horrible. Terrible. Bob Dylan is rolling over in his grave and he’s not even dead yet.

Crispin Glover – These Boots Are Made For Walking

To be honest, not nearly as weird as I thought it would be.

The Isley Brothers – Hello, It’s Me

Quite frankly, I wasn’t sure this was the Todd Rundgren song, and I’m still not sure these guys were sold on the idea in the first place. Nice effort though. Dig the outfits.

Couldn’t do this without something from The Shat.

This might as well be Richard Cheese, but it’s not. Meet Roddy Frame; Scotland’s second worst contribution to music since the bagpipe.

TV On The Radio – Mr. Grieves

This video was posted in Noel Bancredi’s Petrology 101: King Crimson, but still, breath-takingly awesome and well worth another listen.

Will blow your head clean off your shoulders. Fucking scary good.

The Sisters of Mercy – Jolene

Will make you slash your wrists with a rusty pair of scissors. Fucking repulsive.

Well, there you have it, Jim Morrison.

4 thoughts on “Through the Record Club, Tangentially”