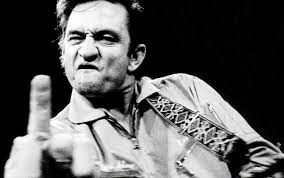 A couple of weeks ago, I mentioned Johnny Cash as an example of the songwriter I didn’t want to emulate, and nobody said anything and that’s fine. I meant no disrespect. At all. In fact, he didn’t even write “A Boy Named Sue”; that was Shel Silverstein. There are few people who ever lived that I would say you gotta like, but you gotta like Johnny Cash and Shel Silverstein, if nothing more than for their compassion and humanity.

Although I own maybe one or two of his recordings on vinyl, my respect for Johnny Cash’s life, work and legacy will never be diminished. His television appearances, including the commercials, are perhaps the most under-rated or over-looked aspects of his career.

I’m not the world’s biggest fan of movies and television, but I generally know what’s currently cooking. Likewise, as a toddler of the 70s, TV wasn’t my life but I still had my jams. WKRP in Cincinnati, All in the Family, The Jeffersons, Sanford and Son, The Odd Couple, Good Times, M*A*S*H*, The Benny Hill Show, et al. These are classic, eternal programs that will forever stand the test of time.

To be frank, since the early 70s contemporary television has gotten progressively worse and I don’t see it ever getting better. In fact, there’s still room for deterioration; it can and will get worse. I think people watch reality shows out of sheer laziness. This is what TBS is giving us this season? OK, let’s watch that. All forethought is precluded. People continue to watch reality shows even though they know it’s a bunch of scripted nonsense precisely because it’s scripted nonsense.

Fortuitously or not, we now have YouTube and an ocean of online media providers, so nobody is lacking for terrible programming to make or watch. Likewise, there’s a ton of great stuff just floating out there in the ether.

Take for example The Johnny Cash Show, a music variety program hosted by the Man in Black from 1969 to 1971 on ABC. While I was too young to remember, I’m 99% certain that my family watched at least a couple of episodes. The JCS was somewhat unique at the time for featuring a wide range of folk-country musicians, such as Joni Mitchell, Bob Dylan, Linda Ronstadt, Kris Kristofferson, Neil Young, Gordon Lightfoot, Merle Haggard, and James Taylor, in addition to jazz great Louis Armstrong, Stevie Wonder, Ray Charles, Charley Pride, and even Derek and the Dominos, who are surprisingly good (without Duane Allman). In fact, the complete list of guests over the course of 58 episodes is pretty staggering. Ed McMahon and Albert Brooks made appearances. It was a cool show. Enough said. Here’s a link to the complete first episode which features Bob Dylan and Joni Mitchell. Insane.

Cash opened each show with one of his own jams, usually backed by a rotating cast of regulars including June Carter Cash (his wife) and the Carter Family, The Statler Brothers, Carl Perkins, and The Tennessee Three, and The Statler Brothers performed brief comic interludes, which I believe may have been influenced by Hee Haw, a similar but more comedy-centric variety program that originally aired on CBS at the same time as the JCS. Hee Haw was the premiere showcase on commercial television during the 1970s for bluegrass, gospel, and other styles of American traditional music.

Anyway, after sifting though the clips on YouTube, I’ve assembled what I believe to be the best of the best performances – the Top 20+ – although you can compare it to this article by Margaret Eby on Flavorwire, which was written in 2011; we agree on three accounts: Joni Mitchell, Derek and the Dominos, and Louis Armstrong. In particular, Eby was impressed by CCR’s performance of “Bad Moon Rising”, which to me, is musical styrofoam. Anyway, no question, the duet between Johnny and Joni on “Long Black Veil” is one of the greatest things I’ve ever seen in my life on YouTube.

And as a bonus for all you industrious kids who scroll to the bottom, I’ve also included a trio of television commercials featuring Johnny Cash. You gotta be at least 30 years old to remember that Taco Bell spot, which is among the greatest things I’ve ever unwittingly stumbled upon while surfing the net.

It’s easy to see why a lot of dudes fell hard for Joni. She’s magnetic or something. Quite a soul, that woman is.

3. Neil Young “The Needle and the Damage Done” and “Journey Through The Past”

One of the finest Neil Young performances of “The Needle” that I’m aware of. Gave me goosebumps the first time.

4. Stevie Wonder “Heaven Help Us All”

I’m partial to Stevie. He’s pretty much my favorite vocalist of all-time. Here’s another reason why.

5. Hank Williams Jr. Medley of Hank Sr.’s “You Win Again/Cold, Cold Heart/I Can’t Help It (If I’m Still In Love With You)/Half As Much”

Man, that kid could sing before he turned into a cartoon character. Much respect.

6a. Bob Dylan “Girl of the North Country”

I’ve reversed the original order of appearance. I don’t know. “I Threw It All Away” sounds to me like a throwaway. It rates here because it’s great to see Dylan in this era, just making his comeback.

7. The Everly Brothers “That Silver Haired Daddy of Mine” feat. Ike Everly

Very rare clip of their father, Ike, on guitar.

9a. Derek and the Dominoes “It’s Too Late”

9b. Derek and the Dominos feat. Carl Perkins “Matchbox”

This is amazing. And I don’t even like Clapton, but he’s alright. Sweet.

Charley Pride was actually the first and really only country guy I cared for as a kid, and in fact, I own the 45 of this jam.

Johnny kinda stumbles a bit on this one, but Roy is rock solid.

It’s only been the last decade or so that I’ve come around so to speak with this outlaw country stuff, but it all starts right here. Waylon was the original, and he’s really loose here. Good stuff.

Bad audio. If you really need to see this, look for a better version.

I taught myself how to play this jam from this video. Or at least, I tried.

18b. Jose Feliciano “I Guess Things Happen That Way”

Love me some Jose, baby. Should really be rated higher, but things got hectic.

I think Johnny and Bobbi did it a few times. Watch this and say otherwise. Christ.