The California of my mind is a “magical” place where everybody gets a prize of undetermined value. Likewise, San Francisco is many, many things to me, but most of all, it was home for nine years. And for a long time, I thought it would be madness to live anywhere else.

According to a Business Insider report on Transit Score® rankings, S.F. has the second most reliable public transportation system in America, second to New York.

A lot must have changed in the six years I’ve been gone, because the S.F. public transportation system I’m familiar with, was less than dependable. That’s being nice. Muni is a joke – a total joke, and then again, you’ll hear people say, “Muni is no joke.”

During my residency, I relied on Muni for approximately three long, excruciating years of unpredictable service and general anxiety – I never knew from day to day if I was going to get to work or school on time. Almost any bus or light rail line could be inexplicably shut down, delayed or re-routed according to the whims of the central command, and/or circumstances beyond any one person’s control, or at least, that’s the way I chose to see it.

To be fair, Muni got me to where I needed to be more often than not. You never remember all the mundane trips back and forth where nothing unusual happened. It’s always the unpleasant events that linger in your memory. However, I never left the house in a big hurry. You can’t roll on Muni without a comfortable time buffer. If I had to be some place that would take an hour on Muni, I left an hour and a half in advance.

This most recent trip to California was 95% business – not much time for fun. In S.F., Chris Lanier offered to let me use his car when he didn’t need it, but that left me with a day or two without wheels. In the past, I had always rented a car; this time, I decided to let fate decide. Roll the dice.

Arriving at the outset of Memorial Day Weekend, both the Giants and the A’s were playing at home, so the Bay Area was buzzing with baseball fever – and nowhere were people more buzzed than on public transportation.

The first-place A’s had Detroit and the Giants faced the bottom-feeding Cubs. My man Sean Cunningham invited me to attend the A’s game with his family on Memorial Day. So for the first time in three days, I found myself on Muni. 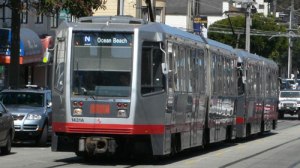 I was staying with my brother Matt Tucker at 48th and Ortega– deep Outer Sunset. Getting to Rockridge in Oakland – our initial meeting point – required Muni and BART, the latter being an infinitely more reliable system, but it was a two-hour-plus journey in either direction. Anyway, it was interesting to see the confluence of A’s and Giants fans as they moved in both directions. For the most part, the trip to the Coliseum was uneventful, but the ride back to the Sunset was mildly amusing and somewhat nostalgic.

Among other things, I came across The Post-Prep Muni Sizzurp Boss.

On the N-Judah headed west; this cat oozed his way onboard at Cole and Carl, rapt in stupor, and deliberately – it must have taken him five minutes – proceeded to mix up a batch of promethazine and codeine cough syrup, otherwise known as Sizzurp. Then he sat like this, taking painfully long and tedious draws from his cup, until 19th Avenue, where the double-red light gave pause. Sizzurp Boss very slowly – glacially – made his way off the train just before the doors closed.

I snapped this photo on my phone right before its battery died. Obviously, Sizzurp Boss didn’t notice.

Even though I think those hats are silly and have my own personal stereotypical assumption about people (men and women) who wear them, I was impressed. New shoes, new jacket, new backpack. Just a real nice, junkie-next-door kind of cat. Clean. A fiend with style, more or less. Kind of refreshing, actually.

I thought, “Well, would you look at that – he’s got a pink iPhone.” A regular student.

On the other hand, cough syrup and codeine is for amateurs.

Two stops later, I was treated to a much more familiar sight – something I was used to seeing on a daily basis: A pair of straight-up junkies – a man and a woman – climbed aboard and began arguing about which direction they were supposed to be headed. These two were Old School needle fiends; bundled up for Arctic conditions on one of the most temperate and reasonably warm days in a decade, their exposed patches of skin had the consistency of hamburger meat.

The man seemed relatively composed and convinced they should be heading west – which they were. The woman was shaking uncontrollably and clearly wasn’t sure exactly where the hell she was. They smelled like rotting garbage, of course, and the few riders left onboard sighed in relief when the pair disembarked at Sunset.

A skater kid sitting nearby looked over and said, “Shit, man. I thought I had a drug problem.”

The next day’s agenda was packed with stuff I needed to accomplish, but it was back-to-work for Chris and I wouldn’t have access to his car until later in the day. The morning couldn’t go to waste, so I took a deep breath, and decided to see how far Muni would get me.

Took the 71 bus from the western terminus at 48th and Ortega, got off at 23nd and Judah. Following a bizarre 45-minute delay for an eastbound train, during which time, that unfortunate lot of us standing at the N stop watched not one but five westbound trains come sailing past. And at the same time, we’re all facing west, looking for the next train to come up over the hill at 34th. Finally, a two-car N rolled up, and of course, it was packed to the gills. No way I was getting on that thing. The Muni app on my Samsung said: Next train in 22 minutes. My agenda had been all but thrown out the window – I couldn’t throw it out a window because I was out of doors. Disgusted, I walked to Irving Street, hailed a taxi, and went straight to Enterprise Rent-a-Car on South Van Ness.

The precise location was 22nd and Judah – in terms of how far Muni took me before I said, “Screw this.” It was approximately 11:30 a.m, over an hour since I left Matt’s house. I could have walked there and back in the same amount of time.

The kids at Enterprise gave me a Ford Focus. It was a nice enough car, and pricey, too. But man, it was worth it. The agenda was back on track, and in fact, from here on out, almost everything went as smoothly as it possibly could. A game-changing decision. Get off Muni, now!

Bottom line: There’s a reason I owned a car for most of the time I lived in S.F., and it wasn’t a love of paying a grand in parking tickets every year. It was Muni, plain and simple.