If there’s ever been a bit of unsolicited advice that I would wholeheartedly share with my child, it’s that nobody likes a whiner. People who complain all the time are a drag, and they’re generally more than willing to bring you down with them.

That said, my life in Taipei is somewhat stagnant. All work and very little play. But I don’t like to complain about it. I’m a problem solver, right? Therefore, I’m always on the lookout for creative projects to keep me busy during idle times, which is part of why I wrote The Lazy Bastard Guide to Mandarin, and recorded another Aztec Hearts album, and maintain Black Sunshine Media. It’s something to do.

You know what else I do in my free time in Taipei? Drink. A lot. Pretty much every night, unless it’s physically improbable. Mostly red wine, but I will drink beer when I’m hanging out with friends. Hard alcohol (liquor) is almost never part of the conversation, but I’ve been known to order a cocktail – usually a vodka Martini – in the airport smoking lounge. I don’t have a grudge against cocktails with distilled spirits; they’re just too rough on my liver, which has taken a beating and deserves the benefit of the doubt. Don’t even ask me if I want a “shot” of anything. The answer is no.

Beer may be the oldest alcoholic beverage known to man, and the third most-consumed beverage in the world, behind water and tea. A fermented beverage using rice and fruit was made in China around 7,000 BC, and the product that early Europeans guzzled might not be recognized as “beer” today. Alongside the basic starch source – the sugar required for fermentation – the early European beers would contain fruits, honey, a variety of plants, spices and other substances such as psychotropic herbs.

By the 16th century, beer was so important that the Duke of Bavaria, William the IV, introduced a purity law called Reinheitsgebot, which was the only really notable thing Bill did in his life, but everybody took the law very seriously. According to Reinheitsgebot, the only permitted ingredients of beer are water, hops and barley malt. It remained the oldest food-quality regulation in use up until 1986, when it was abolished by the European Union as a ‘binding obligation.’ Germany passed some new law in 1993, and that’s all I know or care about that.

Taiwan loves its beer, loves the fuck out of its beer, specifically, its own beer: Taiwan Beer, brewed by the Taiwan Tobacco and Liquor Corporation. They drink the stuff by the tanker. It’s pumped in through the hydrants – they use it to put out fires.

Taiwan Beer is unquestionably the island’s most iconic brand and prominent cultural institution. Brewed as an amber lager in a Pilsner style, its distinct taste is produced by the inclusion of ponlai rice (locally harvested “Formosa rice” 蓬萊米). The ponlai is added to the malt during the fermentation process in order to save money on more expensive ingredients such as hops and barley – you know, the stuff beer is supposed to be made from – which are not widely grown in Taiwan, as well as to impart a purported “smoothness.”

Though it’s somewhat of a contentious issue on the street, I’m going to be honest with you people. I can’t stand Taiwan Beer. It makes me unhappy. And I drank Taiwan Beer for my first year in Taipei mainly because I was running on adrenaline and not paying attention. I reckoned, “I’m in Taiwan, I should drink Taiwan Beer.”

A lot of rookies make the same mistake. My good fortune was to catch it and cut it out.

Taiwan Beer’s “distinct taste” is codespeak for raw, unpleasantly earth-like flavor, which gets progressively more rancid as the beer gets warmer in your paw. Some of the most difficult swallows of my drinking career were the last gulps of a Taiwan Beer tallboy. It’s like drinking run-off from a landfill. You kind of hate yourself after those.

Nowadays, when I’m in a situation that calls for drinking beer – usually hanging out at a 7-Eleven – I strongly prefer two Japanese beers, Asahi and Kirin, over anything else in the cooler. I can’t say that I would never drink Taiwan Beer again. There are plenty of extenuating circumstances in which I could imagine drinking a few Gold Medals. I can say with nearly absolute veracity that given other options, I would chose not to drink Taiwan Beer.

Taiwan Beer has one smaller local competitor, Taiwan Long Chuan Beer, owned by the Taiwan Tsing Beer Corporation and brewed in Kaohsiung City. In 2012, Long Chuan launched a line of fruit beers, which were supposedly very popular in the summer. Taiwan Beer quickly entered the market; they now have five different fruit beers in stores. Long Chuan has four – that I’m aware of. They might have 50 for all I know. I see four in the cooler at 7-Eleven.

Back when I was a bachelor, I used to hang out at this local bar called Sam’s Club. One night a pair of women came in and ordered some strange bottle of beer, and then proceeded to share it, all the while cooing over the drink and taking a bunch of selfies with the bottle. I said to the bartender, my friend Simon, “What the hell are they so excited about?”

“That’s the new lychee beer. It just come out.”

“Lychee beer. Are you serious.” No question mark necessary.

All right, so I’m not a big fan of lychee, either. Smells like perfume to me.

So for the last two years, I’ve been seeing this gradual expansion of fruit beers in the coolers at 7-Eleven and my local supermarket of choice. Every time I walk by, I think, “Who the hell is drinking that crap?”

Here’s something you probably didn’t know about me. In 2004, I took and passed the Introductory Course for the Court of Master Sommeliers. The certificate essentially means that I had a fundamental yet significantly developed knowledge of wine – how it’s made, where it’s made, who makes it, what it tastes like and most importantly, why. [The passing rate for the course is 60%, by the way – so it’s not terribly difficult, but it’s not a walk in the park, either.] It would be hubris to call myself a sommelier – I am not. But if I had stayed in the restaurant business, I may have moved on to the next level. It’s impossible to say.

The other day, my friend Beldone and I were yapping back and forth about some random people promoting their fancy beer-tasting event at a local restaurant. We were basically making fun of them, because that’s what we do when we’re not making fun of each other. But man, even beer can be pretentious, especially in Taipei. I [wrote], “Yeah, I taste beer every time I drink it.” Real clever, sport.

Anyway, this afternoon I went to the supermarket and I saw a woman perusing the fruit beer section – and it is a section, no doubt – and so I stopped to see what, if anything she would buy. I was super curious, man. I’d never seen anyone buy or drink a fruit beer, other than that one time at Sam’s. The woman picked up and eyeballed a couple of items, but ultimately walked away without making a selection.

Then it hit me. Let’s do a fruit beer tasting! And so I grabbed a basket and loaded up on 11 cans of liquid, which set me back approximately ten bucks.

After putting the fruit beer in the fridge for a couple of hours to get it down to a drinkable temperature, I reluctantly selected the first candidate – grape – because I really dig grape soda, which Beldone tells me is the number one drink of choice among inmates on death row. Now, I don’t know where he got that information but it seems highly plausible; grape soda does kind of seem like the beverage of the doomed. Let’s see how much further down the line of damnation we can go.

* The majority of these beverages are 2.5% alcohol unless otherwise noted. 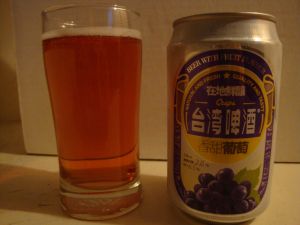 And there you have it, kids. Another episode of Only in Taiwan comes to an end. I’m going to open a bottle of Tempranillo and get rid of all these stupid fruit beer cans.