Long before she was dubbed “the Godmother of Punk” – or subbing for Kurt Cobain in a sad but necessarily reunited Nirvana – Joan Jett was just another rock n’ roll star trying to make the best of her career.

A founding member of the legendary all-female rock band The Runaways, Jett embarked on a solo career in 1979, teaming with a cat named Kenny Laguna, who played keyboards for Tommy James and the Shondells (“Mony Mony”), Ohio Express, and The Lemon Pipers (“Green Tambourine”); and Jay and the Americans (“This Magic Moment” and “Walkin’ in the Rain”). Oh, and he produced Bow Wow Wow’s version of “I Want Candy”.

Given their collective pedigrees, it seems like the Jett/Laguna collaboration would be a slam dunk, but it took extraordinary persistence. Jett’s solo debut Bad Reputation (1980) was allegedly rejected by 23 record labels. With Laguna’s help, Jett assembled a backing band and finally grabbed the proverbial brass ring with Joan Jett and the Blackhearts’ blockbusting, chart-topping album, I Love Rock n’ Roll (1982).

Following the massive success of the title track, Jett enjoyed a string of Top 40 hits, most notably a cover of “Crimson and Clover” and Gary Glitter’s ingenious “Do You Wanna Touch Me”. Her debut album was reissued and the track “Bad Reputation” became something of a cult classic. 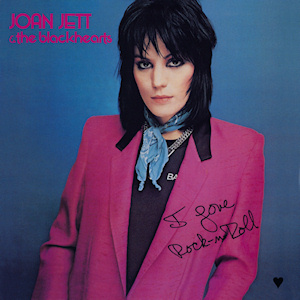 However, Jett’s second biggest contribution to popular culture has to be the unfortunate “I Hate Myself for Loving You” co-written by Satan himself Desmond Child. Released in 1988, reaching #8 on the Billboard Hot 100, it was later used as the theme song for Sunday Night NFL games (2006-2007). And you know that’s some serious coin.

Anyway, her career most likely buoyed by the inexplicable success of “I Hate Myself”, Jett released an album consisting entirely of cover songs, The Hit List (1990) which wasn’t out of her realm – most of her big hits were covers.

What’s perplexing is the overall direction and presentation of Jett’s image. To be certain, I wasn’t paying attention in 1990. No longer depicted as the tough, swaggering ‘original Riot Grrl’, Jett was re-branded and packaged as a more mature sex symbol of sorts. A Pat Benatar for the new generation. At least, that’s what they [record company executives?] were shooting for here.

The history of cover versions is rife with bad decisions and poor judgments. One only need to read the fact that Avril Lavigne did a cover of John Lennon’s “Imagine” in order to know it’s one of the more sacrilegious recordings in the history of time.

Ahem, I don’t want to be down on the women in rock.

To be fair, what Rod Stewart did to “Downtown Train” is unforgivable.

And Motley Crue’s “Anarchy in the U.K.” is treasonous.

On the other hand, Britney Spears’ tepid version of Jett’s “I Love Rock n’ Roll” is pretty stinky, but its stench pales in comparison to Madonna’s version of “American Pie”.

It doesn’t seem possible that someone could take Don Maclean’s “American Pie” and make it stink any worse than it already does. Tut-tut. Not when Madonna’s on the job. No, sir. She can make anything worse.

Anyway, it doesn’t really surprise me that Jett had the moxie to cover AC/DC’s “Dirty Deeds Done Dirt Cheap”. What really sort of shakes my rock n’ roll foundation is that she somehow, for some reason, agreed to make a video for the song. And the video looks like this: 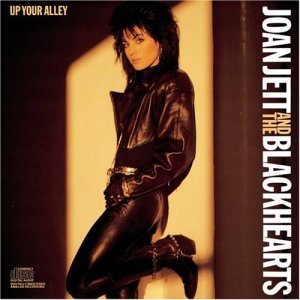 Clearly, I don’t know Joan Jett. Maybe she was onboard with the image. The implicit sexism is neither extreme nor offensive, but it is obvious. Maybe she has courting the lipstick lesbian demographic, I dunno. And I’m gonna cut her some slack. Even the Godmother of Punk has bills to pay.

To be honest, The Hit List looks like a fun record and covers some fairly amusing stuff. I’ve enjoyed the irony of her take on ZZ Top’s “Tush”; I’ve cringed in delight during her version of Jimi Hendrix’s “Up From the Skies”. And you can, too!

Joan Jett – Up From the Skies

However, when she does get inducted into the Rock n’ Roll Hall of Fame – it’s a WHEN, not an IF – I’m fairly certain there will be no mention of “Dirty Deeds”. And she probably deserves the free pass. She’s a cool chick.

I had the distinct pleasure of seeing Joan Jett and the Blackhearts in the opening slot of the Police’s Synchronicity World Tour in 1983 at Comiskey Park, Chicago. The boos and the jeers started from the minute Jett took the stage, and the heckling gathered steam during her set. The band couldn’t have been on stage longer than 30 minutes before Jett stopped, said something to the effect of “Fuck y’all”, flipped us the bird, and walked off stage. That was pretty cool. That was rock n’ roll. I love rock n’ roll.