It’s a fact: What goes up doesn’t always come down. All hell broke loose in the late 60s – early 70s, and in spite of (or maybe because of) the chaos, some remarkable music was made. Equally important, we’re now seeing a phalanx of splinter genres reaching maturity: psychedelic, folk rock, country rock, heavy metal, hard rock, acid rock, jazz fusion, jazz rock, progressive and … END_OF_DOCUMENT_TOKEN_TO_BE_REPLACED

At this point in the game, Bob and Ron have absolutely found their groove (pun intended), and you can not only see it in their choice of cuts but hear it in the on-air dialogue. Episode 82 has a couple of sub-themes running; it’s the end of summer, so of course, the kids are going back to school. Bob and Ron give us some tasty … END_OF_DOCUMENT_TOKEN_TO_BE_REPLACED

Inspired by a new psychedelic lighting system in the studio, Bob and Ron waste no time getting in the groove. Episode 81 features lot of listener requests, plus special Bob and Ron selections from the depths of their collections, and every one is a joy to hear. As usual, Bob and Ron do what no other radio show can do, pushing the limits of programming … END_OF_DOCUMENT_TOKEN_TO_BE_REPLACED

As Bob says in the opening, this episode is a “mixed bag” of funk and psychedelic gems from the deepest grooves of vinyl. Focused on the music of Spirit—dedicated to the passing of original keyboardist John Locke—Episode 77 contains an unusual abundance of outright obscure and unheard of bands and records. Which is what Bob and Ron’s Record Club is all about. END_OF_DOCUMENT_TOKEN_TO_BE_REPLACED

Episode 76 is so good there’s not that much to say about it except LISTEN TO IT RIGHT NOW. Mainly dedicated to Love and Arthur Lee (who had just passed away), the show also features mind-bending tracks from 10cc, Caravan, Teenage Opera, Manassas, Gandalf, Tomorrow, Potter St. Cloud and of course, Humble Pie. There are shout-outs to loyal fans, [G.W. Douglas and Lisa], call-ins from … END_OF_DOCUMENT_TOKEN_TO_BE_REPLACED

Bob and Ron’s Record Club is a mind-altering substance, and Radio Archive Episode 74 has a speedy edge to the “dose.” The latest episode is a potent, high-energy set of amazing tunes and as always, the Record Club conversations of Bob and Ron. Great tracks from Curtis Mayfield, Stevie Wonder, Devo, Wet Willy, Tommy James, and many more. Don’t worry about getting into this episode, … END_OF_DOCUMENT_TOKEN_TO_BE_REPLACED 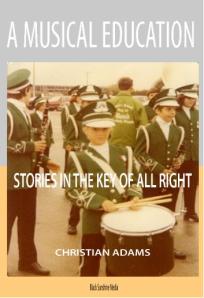 Here’s how it descends into madness. I have a new book coming out, A Musical Education: Stories in the Key of All Right; it’s my second book and the first published by Black Sunshine Media. Aside from writing, editing, and all the creatively technical crap that goes along with producing the guts of a manuscript—which is 99% complete—there’s a whole nother laundry list of stuff that needs to be done; the majority of which are tedious tasks that make you regret having written a book in the first place. Some of you may have gone through the sausage-making process of querying agents and publishers, so I’m winking at you right now. Fortunately, and I say this with fingers crossed, by publishing under the Black Sunshine umbrella, several of those chores are no longer necessary. One of the benefits of being self-employed is not having to bother with a resume.

However, a completely different set of tasks come with being a publisher. This isn’t really about all that nonsense—it’s supposed to be a promo for the new book. In fact, that’s what I was working on when the wheels came off. But first, there is the subject of the book, which I’m hoping from the title you should be able to infer that it’s about experience and the splendor of music in life. More than half of the 10 stories that comprise A Musical Education have been previously published, either here on BSM or on my previous weblog, and each story is accompanied and augmented by relevant photos. Or at least, that’s what I was able to get away with on the website. Publishing a book is a different ball of wax.

My original thought was that while the inclusion of these photos was not essential, it would substantially improve the overall reader experience. For instance, the book’s opening story, “Fourteen Thousand Screaming Japanese Girls Can’t Be Wrong” is an extended meditation on my adolescent fascination with Kiss lunchboxes and Cheap Trick’s At Budokan. It seemed obvious to me that the narrative would benefit from, at the very least, a thumbnail of the album cover. Meanwhile, as long as we’re at it, why not throw in a few more photos, like one of the Kiss lunchbox? Since every story involves music in some way, we’re talking about somewhere between 50 and 100 potential images.

END_OF_DOCUMENT_TOKEN_TO_BE_REPLACED

In anticipation of some truly exciting developments looming on the horizon, it’s time to pump some life into the Audio Division.

We are pleased to announce Audio Resuscitation, a new series of Soundcloud audio tracks pulled from the archives of all current BSM recording artists. The majority of featured tracks will be previously unreleased rarities including personal home demos, outtakes, practice tapes, and obscure cover songs, plus details of pedigree, circumstance, and anecdotal reference from the artists.

To kick things off, here are three tracks from Christian Adams’ 2000 Demos, the title itself a play on the year it was recorded, and a mild exaggeration of Christian’s demo catalog. Only 10 copies of the CD with original artwork were printed and passed out to friends; it is uncertain if any copies still exist.

“I’m High” – During the mid-90s there was a club on the north side of Chicago called Delilah’s where I would occasionally score dope from a guy who looked like Elvis. That’s the first verse: ‘A slow death in fives/The fix is inline/It’s on at Delilah’s tonight.’ A five was one mini-Ziploc of 50mgs, so for a quarter gram you’d say “Five on five” or “five” and get a bundle of five baggies. So that’s where most of the lyrics came from; basically cribbed from memories of being really high at Delilah’s. The place was always full of freaks and I mean that in a good way. None of my friends knew I’d been dabbling in heroin, and none of them hung out at Delilah’s on a regular basis. Then I left Chicago and moved to S.F., where I started secretly using again, hence, the inspiration for the music itself. While the song was definitely written under the influence, I’m pretty sure I couldn’t have pulled this off if I were nodding out.