If you’ve ever seen someone go from hero to zero, you know that the fall from grace does not always come with a warning signal or a flashing red light. And it’s really hard to have a hero in a place like Taiwan.

So many people I know, myself included, have vested interests and agendas that restrict our capacity for compassion as well as courage. Most of us are looking out for ourselves first, and everybody else can suck it if they have a problem with that. This is the essence of expat survival. Only the Red Cross goes abroad for charity.

There is a foreign guy living in my neighborhood, at least I think he lives here, since I’ve been seeing him maybe twice a month at the supermarket or the 7-Eleven for about a year. He’s a white North American, in his mid-50s, short and stocky, with close-cropped gray hair on top of an alarmingly symmetrical square head, and somewhat of a prominent hook to his nose which gives him an odd sort of Roman appearance. I could easily see him wearing a toga and headdress of golden fig leaves like Dom DeLuise on the set of History of the World, Part 1.

Ordinarily, I don’t pay close attention to other foreigners—especially around here, in the Da’an District—but over the course of two dozen or so sightings, this guy has emerged from the background simply because I know he doesn’t speak a word of Chinese, which is probably why he lives in this relatively Western-gentrified part of town. Unless you wander off into some of the darker alleys on the east side of Anhe Road, the majority of people at the retail and service level in Da’an, from Starbucks to the post office, speak at least enough English to make basic transactions. And I know his Mandarin skill is sub-nihao because I’ve stood behind him in line enough times to know how he operates. I’ve never heard him say a word of Chinese; even if he’s addressed or asked a question in Chinese, he always answers in English and it’s usually something along the lines of, “What? I’m sorry, what are you asking?”

That’s totally fine and acceptable in my book, since I have argued that speaking Mandarin is not an absolutely necessary survival skill in Taipei City. At least it shouldn’t be, considering the fact that English is a compulsory subject in the Taiwanese education system from elementary school on up. What the fuck do you think all of us are doing over here anyway? Most of us are in some way, shape, or form, involved in the teaching of English. Thus, criticizing a foreigner for not speaking Chinese is like scolding an employee for a not doing a job he wasn’t supposed to do in the first place.

It had been a while since I’d seen this guy but that didn’t occur to me until much later. Overall, he seemed to be polite and modest, if not a little prickish, but I’m also a little prickish, or at least I like to think so. Therefore, I’ve never made any sort of contact with him despite passing so closely and with such regularity. There’s never been eye contact or a nod of recognition, in fact, I am pretty sure the guy has never taken notice of me. This is standard behavior for the majority of Westerners who don’t feel the need to make a big deal about recognition.

My feeling is that it shouldn’t surprise me to see another foreigner on the street; it’s not like we’re in lost in the Amazon and yours is the first white face I’ve seen in a month. Just like when I’m back walking the streets of San Francisco, I don’t smile and nod at every white person that walks by unless I know them personally. Being in Taipei is no different and I see no reason for unsolicited cordiality. Furthermore, I don’t feel the need to have foreign friends for the sake of having friends from similar backgrounds; my rule of thumb is that if I wouldn’t hang out with you back home, I sure as hell don’t want to hang out with you here. And I take it for granted that the feeling is mutual.

Of course, this bit of being recognized in public is a whole ‘nother ballgame with the locals, and we’re not getting into that right now. Anyway, as far as I could tell, this particular guy showed signs of being a Lazy Bastard, and therefore, I regarded him not with esteem but a certain amount of respect, if for nothing more than knowing the game and how to play it. Fair enough. Just another Lazy Bastard making his way in the world. Nothing to see here. Carry on. 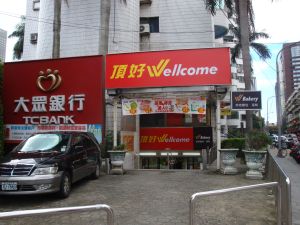 Last night was one of those rare nights in which I forced myself to deviate from the standard post-work routine. The weather is getting cold and the rain had stopped at nightfall—perfect for extended urban hiking—so I decided to go on a little walkabout, looking for two restaurants that I’d heard of but had never tried. After an hour of fruitless wandering—first rule: Google maps are completely unreliable in Taiwan—I headed back to my neighborhood and made a beeline for the Wellcome supermarket to buy my usual two bottles of Everyday Red non-vintage California Red Wine, produced by Wine for Life Cellars in Manteca, CA, 13% alcohol content for NT199 ($6.85) each, which is shockingly good for a six-buck-chuck in Taiwan, where a bottle of plonk-driven Yellowtail goes for an extortionate NT450 ($15.50).

The first thing I saw upon entering the supermarket was my so-called buddy, the assumed-to-be Lazy Bastard, as he was heading toward the checkout lane with his arms full of snack food type items (I saw Ruffles) plus a plastic pouch of laundry detergent, and it looked like he wasn’t going to make it without dropping something. My initial thought was, “Dude, see all these yellow baskets piled up by the door?”

Anyway, I shrugged and headed to the wine section, grabbed my bottles, and doubled back. The checkout lane has two cashier stations; one register on the left, and another two registers on the right. The guy was standing before the first right side cash register and the only customer present. There were two cashiers on duty and I thought I caught a glimpse of a blue-vested manager halfway back toward the dairy case. As I came down the candy aisle and veered toward the open left side register, I could see that the guy had literally spilled all of the items he was holding on to the counter, while the bemused cashier, a nice woman who I know for a fact doesn’t speak more than a few phrases in English and usually works the overnight shift, which made me wonder what she was doing here at 8:30 p.m., stood there and adjusted her glasses.

The left side register was clear and manning her post was another woman cashier who speaks a little bit of English, but she and I have always conducted business in Chinese, since how fucking hard is it to look at the digital monitor staring at you from face-level and say, “I don’t need a bag” in Chinese? It’s not that hard, trust me. And while I don’t look down my nose at other LB’s who can’t be bothered to learn how to say “iced coffee” in Mandarin, when I see it happen, my instinctive response is to turn my back on the situation and let them flounder.

2 replies on “Only in Taiwan – Episode 3: Special Lazy Bastard Edition”

There is no longer a market for the Reader’s Digest always the optimistic happy ending for U S A U S A. And there is no more helium for the ballon arches either.

More evidence that we all are going to die. Please remind me to re-read this if you, L B’er, catch me being in your eyes overly cocky